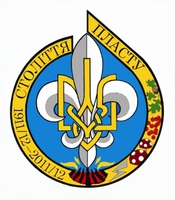 The ideological basis and objective of Plast

The ideological foundations of Plast, outlined by its founder Dr. Oleksander Tysovskyj and expanded during Plast's early development, are built on a Christian worldview and the idea of loyalty to the Ukrainian nation and its ideal of nationhood. They are briefly expressed in the

Faithfulness to God is paramount, because Plast has an idealistic worldview that commands belief in a higher meaning of life, in the Creator of the whole world.

Plast doesn't teach religion, but requires from its members practical religiosity based on Christian principles. Plast doesn't discriminate among faiths and respects each religious faith, but requires living in accordance with Christ's teachings and the requirements of the faith to which the Scout belongs.

The second part of the first obligation: to be faithful to Ukraine means to feel oneself as an organic part of the Ukrainian nation in Ukraine and in the diaspora, to be equally responsible for its well-being and for its reaching complete independence. To this end, the Scout must care about the purity of the Ukrainian language, actively and creatively take part in Ukrainian social and cultural life in his own community, and bring the principles of Plast into it. In sum, faithfulness to Ukraine means that the Scout is always prepared to serve her.

The second principal obligation of the Scout is to help others. This is one of the fundamental commandments of the Christian faith, to love one's neighbor. Plast, similarly to the Boy Scouts, included this godly and chivalrous law into its principal obligations. The call to help others pertains to the Scout's relationship with his community. It also signifies the duty of a Scout to be a useful member of the society in which he lives and to which he is connected. This is why Plast has always included a daily good deed in its requirements, so that the Scout develops the habit of doing good for others.

The third principal obligation of the Scout is to live by the Plast Code, which specifies 14 character traits of the Scout, and appends to that obedience to the Plast leadership, which is necessary for the development of individual character and a sense of order in society.

The character traits of the Plast Code:

Clearly, Plast does not limit itself to keeping its youth involved in Ukrainian culture, but aims to raise exceptional citizens of Ukrainian society. This is why it demands more from its members.

Plast doesn't discriminate among its members by education, faith, social or economic class. Anyone who recognizes Plast's principles, strives to live by them and aims for the standards set by Plast's goal is welcome to be a member.

Clearly, not all members in Plast can be leaders, but Plast aims to train them as much as possible nonetheless. Along with developing their characters, Plast encourages its members to pursue higher education so that they will be ready to take on leadership roles in the Ukrainian community and beyond.

Plast's goal is the nurturing of personable and principled citizens who would be ready to effectively serve their country as useful citizens and leaders. They would also be successful in their personal lives, bring joy and harmony to their families, and generally be optimistic, energetic and happy.

The Organizational Structure of Plast

The smallest organizational cell in the Cub Scouts Branch is the riy, or den, of boys or girls, which has its own name and has from 6 to 10 members. Two to four riys together create a hnizdo, or pack. The riy usually meets once a week. It is led by a counselor. Boy Cub Scouts call their counselor bratchyk(brother), and Girl Cub Scouts call theirs sestrychka (sister). The head counselor of the hnizdo is called the hnizdovyj. Hnizdo meetings, at which all the riys gather together, occur around once a month. These meetings are led by the hnizdovyj. Each hnizdo has a name and sequential number and is registered with the National Plast Council. Boys' Cub Scout packs are odd-numbered, while Girl's Cub Scout packs are even-numbered.

At 11 years old, Cub Scouts move to the next older branch - yunatsvo, or Scouts. This branch is also divided into separate branches for boys and girls, Boy Scouts and Girl Scouts. Its organizational structure is similar to that of the Cub Scouts, with the difference being that the riy is now called a hurtok, or patrol, and a hnizdo is called a kurin, or troop. Each hurtok has its own name. Troops have sequential numbers and patrons and are registered with the National Plast Council.

Another organizational difference between the Cub Scouts and Scouts is that the Scouts choose their own leadership from amongst themselves. Each hurtok chooses a president, a vice president, a secretary, a treasurer and an archivist. All the hurtoks in a kurin elect the kurin leadership: a president and other posts as in the hurtok. This way, Scouts learn to perform different functions and get used to fulfilling duties. Scout groups have their own counselors, whom they refer to as druh or podruha, which means friend. The head counselor, or scoutmaster, of the kurin is called the zvyazkovyj or zvyazkova. The head counselor and other counselors in yunatsvo are typically Older Scouts (aged 18-35) and Senior Scouts (aged 35 and up).

Older Scouts are organized into working groups at the district level, and can also become members of Older Scout fraternities and sororities. Older Scouts with formal training become counselors in the Cub Scout and Scout branches, while some perform administrative work in Plast or community work beyond it.

At 28 years of age, Older Scouts may become members of the oldest Plast branch, the Senior Scouts, or can choose to remain Older Scouts up to the age of 35, the upper limit for the Older Scout branch.

In locations where Plast is centered, all 4 branches usually exist. Together they form a Plast stanytsya, or district. District elections are held each year, at which a district executive and other members of the district leadership are chosen for different sectors of work.

Similarly elected are the highest ruling councils of Plast: the Holovna Plastova Rada, or Plast National Council, and the Holovna Plastova Bulava, or General Plast Executive. At the International Conference of Plast Organizations, held every 3 years, the General Plast Executive reviews the working agendas of all member countries and reinforces the unity of Plast across the globe.

To reach its developmental goals for each scout, Plast has proven methods which are part of scouting activity agendas. The forms of activities are varied. They can be regular meetings of a riy or hurtok, larger meetings of the hnizdo or kurin, Cub Scout campfires or Scout bonfires, field games, trips, camps, and other activities. Each activity consists of various elements, chiefly games, songs, stories, crafts and lectures.

Plast isn't school and has different methods of education, which is why Plast activities are referred to as a game.

Not everyone duly values the Plast game and thinks that the game is the same as 'amusement' - only for entertainment, to pass the time. But in the Plast system, the game performs the most important function - personal development. In a properly led game, where rules are followed, children learn discipline, honesty, and fairness. They cultivate teamwork, sharpen their senses and develop other positive traits of good character. The game is a successful development method and is the basic form of activities in scouting.

We will not describe here all the elements of Plast activities, but we'd like to inform you about methods of development that include in their programs more specific activities and requirements.

Plast vmilosti, or merit badges, are such methods. They are many and varied: Nature, Ukrainian culture, arts such as Singing and Acting, Mechanics, etc. Merit badges are included in the programs of Cub Scouts and Scouts with the difference being that Scouts have more requirements for obtaining a given merit badge. There are many merit badges that benefit from vocational instructors who know not only how to make their fields interesting but can offer a greater depth of knowledge. This is why Plast needs lay helpers in addition to regular counselors.

Ranks, of which there are three in Cub Scouts and three in Scouts, play the greatest role in the Plast system of development. Ranks are not the same as merit badges. During the year a scout can earn several merit badges, but earning a rank requires a year or more of obtaining the marks of good character and relevant knowledge. The gaining of a rank is a sign that the scout is getting closer to meeting Plast's objective.

One of the most important methods of development is Plast camps. A Plast camp is the culmination of a year's worth of scouting. The camp program inherently includes many different methods of development. Camp has a greater developmental influence and superiority over shorter-lasting Plast activities in the district. Shared long-term living in nature has a great influence on group dynamics. Camp teaches self-reliance, resourcefulness, endurance and discipline.

Plast's system of training includes the Plast uniform and its decorations. The Plast uniform imparts to the organization a nice standard appearance, and gives its members a stronger feeling of membership and reminds them of their Plast obligations. Therefore it is important to make sure the uniform is always clean and in order.

On the shirts of their uniforms, members of Plast wear a number of decorations that speak to membership in a certain branch and to the camps they've attended. Decorations also signify which rank the scout has attained. For each completed merit badge the scout also receives a decoration. Therefore, the decorations of the uniform attest to the accomplishments of each scout. This also encourages working to improve oneself and is an effective method of personal development.

Plast requires the knowledge and use of the Ukrainian language to execute its goal: the development of an outstanding Ukrainian individual. Only use of their native language can allow youths to fully appreciate the wealth of the thousand-year-old Ukrainian culture and impart the ideas that reflect the soul of their own nation.

This requirement is necessary because if members of a riy or hurtok have a weak command of the Ukrainian language, it causes complications in the running of meetings and activities and restricts the scope of the counselor's work.

Therefore, if your son or daughter, for whatever reason, does not have a satisfactory command of the Ukrainian language, it's best to wait another year before signing them up for Plast. Make a greater effort for your children to speak Ukrainian well, and then they'll feel more at ease in Plast. Ensure that all members of your household always use conversational Ukrainian at home.

Plast is not school, and in Plast the Ukrainian language is not learned, but built upon. That is why there is also a requirement for all scouts to attend Ukrainian school. Without it, Scouts cannot actively and productively take part in Plast activities.

The Plast program includes stories and lectures about important figures in Ukrainian history and literature, but these subjects are not taught at Plast meetings - they are the responsibility of Ukrainian schools.

To achieve these ends, it is necessary for parents, Ukrainian schools and Plast to cooperate and build upon each other. It is very important for children to read Ukrainian books, because reading expands their knowledge of the Ukrainian language and acquaints them with different events and phenomena connected with Ukraine.

Children should be encouraged to read Plast publications. For Older Scouts, Senior Scouts and Parents, there is the magazine "Plastovyj Shlyakh" (The Plast Path).

Text adapted from the HPB publication -"Batkam pro Plast (About Plast for Parents)," 1986.

More information can be obtained by contacting our National Headquarters in the United States at:

PLAST DETROIT is a banking partner with